You are here: Home / productivity / The One Business, Productivity, and Life Hack That Nobody Talks About 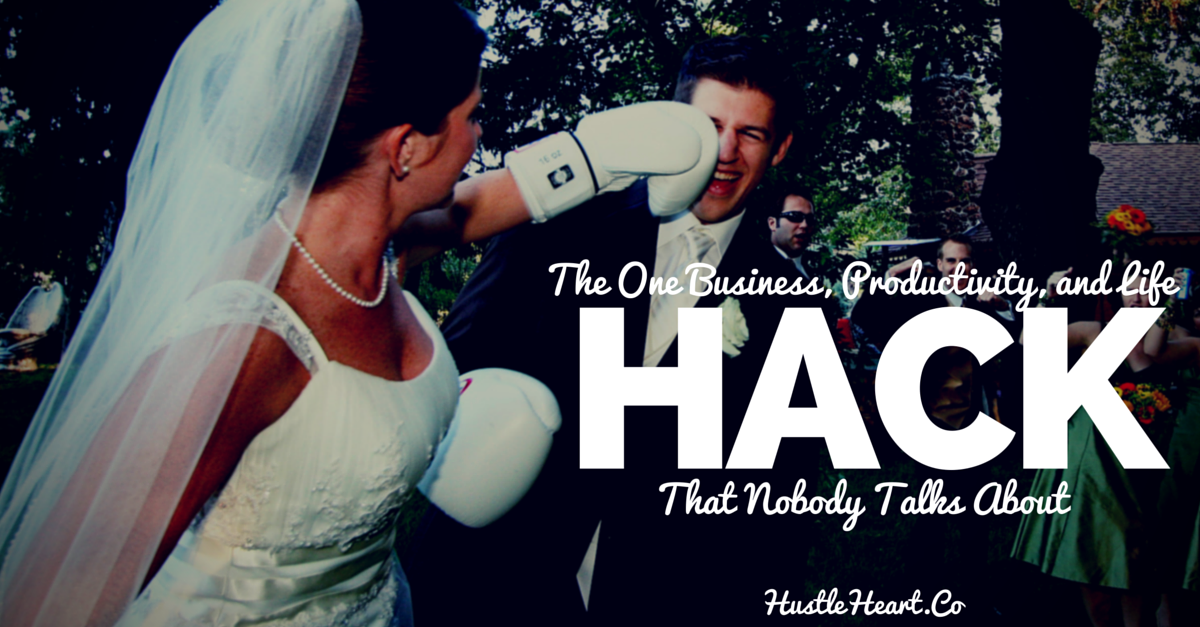 Most guys won’t want to read this article.

This isn’t going to make it on the front page of Reddit or Medium.

Most guys want to read articles about how, with zero fans and no email list, you can launch a six-figure webinar and then automate that to live the four hour work week. Even though those articles are just generic platitudes and a product pitch at the end.

But not you.  You want to know what the greatest business, productivity and life hack ever is because you know what I write is worth your time.

The secret is that you already know what I’m about to tell you.

Here’s what I mean…

When I was a kid, my best friend in the world (also the best man at my wedding) told me that his greatest fear in life was becoming another carbon copy of every working man.

“I just don’t want to grow up, get married, and make more kids just so they can do the same thing.”

I think this was a throwaway line in our life.  There’s a 99% chance he doesn’t even remember saying it.

And since I’m writing about it now, roughly 20 years later, you know that it means quite a bit more for me.

You see, I wasn’t always an entrepreneur.  In fact, I never even really had any sort of drive until about 5 years ago.

When I got married, I knew I wanted to enjoy life and be more than just somebody who increased the world’s popular.  But I had no intention of ever starting, owning, or growing a business.

Now that I have started, owned, and grown a business (3, actually), I’ve realized that there has been no greater single influence on my success than my wife.

The reason that I’m able to work as hard as I do with two sons, and still be an amazing father to them, is because of Lizzy.

I have the freedom to execute on whatever I want in my business, but Liz only grants me that freedom because she knows that I won’t abuse it.  This didn’t happen overnight. I’ve proven many times over the last ten years that I won’t ever take advantage of her trust and, in that way, I’ve earned the fact that she doesn’t just believe, she knows.

When she and I fell in love, we were children.  We met the summer before our junior year of college. We were 20.  Total kids.

See what I mean?

When you are running a business and you’re also in love with another human being, you have to give them priority.

I remember my pastor telling me when we got married that, if we were going to make a serious run at this thing called marriage, we would have to communicate.

No matter how you balance or juggle family and business, you need to make sure that you communicate effectively with your spouse.  When I think of the bigger mistakes I’ve made that have frustrated my relationship with her, and my business, it’s been because I didn’t communicate something important to her when I should have.

Nothing is more important for success than having a massively supportive spouse.  And while we can’t make our spouse support us the way we want, choosing the right one and earning the right to be supported is something within our control.

Gary Vaynerchuk writes that while talent is the greatest predictor of success, having a supporting spouse or significant other is the thing that gives you the time to execute on that talent.

One of my favorite writers, and smartest people that I know, Ryan Holiday, also writes:

“For all the productivity and success advice I’ve read, shaped and marketed for dozens of authors in the last decade, I’ve never really seen someone come out and say: Find yourself a spouse who complements and supports you and makes you better.”

I agree with him that television and movies (Read: Netflix, who even has cable or buys movies any more?) have us believing that a relationship ties us down.

We have to sow our wild oats, right?

We look back and think: “MAN! I wish I had started this before I got married and had kids.”

If you want to start a business, be creative, have ambition, or whatever, then getting married is the worst thing you can do.

And like I said, I was fearful of that when I got married.

But like Ryan, I would’ve blasted right off the side of the planet by now if it wasn’t for her.

I firmly believe that she helped me find my ambition and is now the one charged with taming it.

This is all her fault, really. (I said that out loud to her one time. ONE TIME.)

She has been the accelerant for everything that I’ve wanted to do, 100x that when we had our first son.

And maybe it’s just the fact that I don’t want to admit that if she’d left me where I was 10 years ago, I wouldn’t have been able to pull this off.

Finding contentment and support in my private life has been a catalyst to being violent and creative in my work.

The myth is that a lone entrepreneur enters his laboratory, creates a product that will change the world, emerges one day and the world lauds him with riches and fame in gratitude for his gift.

No customers. No allies.  Nobody.

I am David and my work is my sling.

But that’s not reality at all.

The guys at Fizzle.

Every member of my mastermind.

Every single man that I look up to in my entire life, every single one that makes me think “yeah, being like that would be okay some day.”

They all have one thing in common – they’ve all settled down with somebody who has been and will stay in it for the long haul.  The reason those names above strike me is because, as Ryan puts it, “they’re really two people.”

I’ve had this article on my ‘to-write’ list for about two years.

I think this is possibly one of the greatest truths I can pass on to entrepreneur dads, and even more so to those young entrepreneurs who have no idea that this matters so much.

Why did it take me so long?

Maybe it’s because Liz and I have been together for a decade and started dating as, what I would now describe as, “children.”  Liz has seen 100% of my stupid mistakes that I’ve made and lived with all of the growing pains of being with a man like me.

For most of our relationship, she’s been the adult, which makes sense after all. Women mature much faster than men.  Like Ryan Holiday, I’ve caused the majority of the grief, said the terrible things, done the stupid stuff, and caused most of the drama.

I look back on my twenties and think – What a fucking idiot.

As an American male, in your twenties you make a ton of mistakes and in your thirties, you learn how to do things without messing them up.

And maybe this is also why it took my so long for my business to become successful, or for me to even start one. I wasn’t even a fully formed person and we weren’t truly enough for eachother until just recently.

Find a spouse who supports you and will make you better, whether you want to be better or not.

In this short article, this short piece that somehow is supposed to amalgamate everything that Liz means to my success, I can’t help but think about how none of this success started without her and now all of it matters because of her.

Special thanks to Gary for inspiring this two years ago, and Ryan for writing something that finally pushed me to hit publish.