You are here: Home / Uncategorized / 5 Characteristics of Good Business Coaches and the One You Absolutely Must Avoid 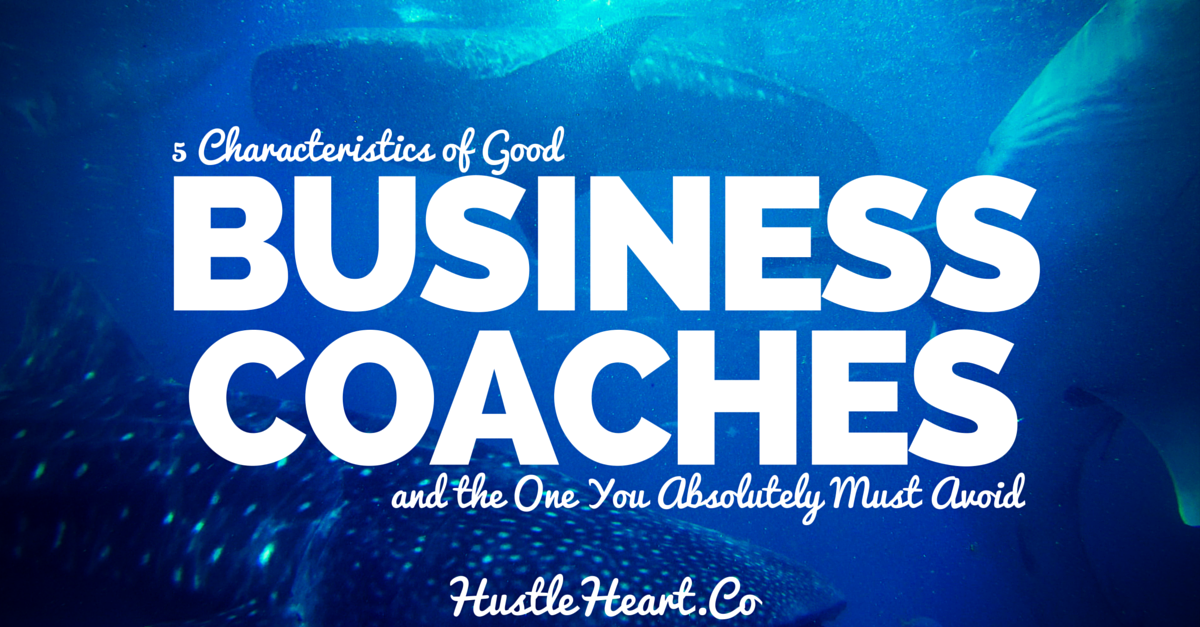 This article was written ages ago, during a time in which I felt really disenfranchised with ‘coaching’ online business.

I let it sit. Let it simmer. And feel that now’s the time to publish it.

It might seem a bit odd to have written an article about coaching, especially as I had just made the decision to wind down my own coaching work.

But I feel like it’s appropriate because it’s been about three years since I hired my last (ever) business coach. More on that in a moment.

I’ve hired three coaches related to my business: one for group coaching, one for one-on-one purposes, and another specifically for my podcast. Here’s the brief rundown of my experience with hiring “coaches”:

Coaching Experience #1: You Get What You Pay For

Literally December 31st, the last day of the year.

I got an email from an online marketer that I trusted (sort of). A friend and fellow business builder has spoken at his event and was featured in his book so I figured if he was trustworthy enough for my friend, then I could trust him as well. 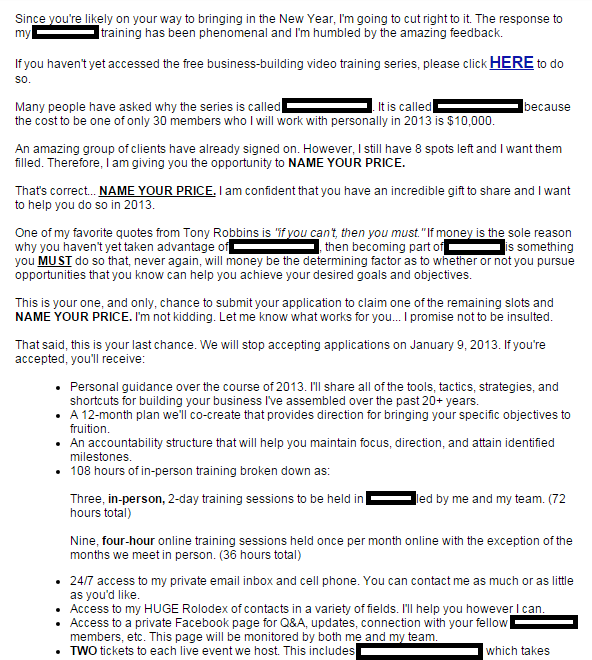 What sold me was what I now recognize as positioning, framing, and priming.

Setting the valuation of the product at $10k, I felt like I was getting a deal.

Only 8 spots remaining and a looming deadline made it feel scarce.

(In retrospect, if he was already making $220,000 from the first 22 people in the coaching, why risk pissing them off by offering it for such a discount to get 8 more people in? Because it was a lie. That’s why.)

But what got me… what REALLY got me to buy in, was a tactic that scammy marketers use where they convince you that if you feel sketched out, you have to buy it.

It’s so damn un-ituitive, but it works.

They’ll use phrases like “take imperfect action,” “everything you want is just outside your comfort zone,” and even the phrase above:

Tony Robbins would vomit if he saw that.

I was finally quoted as needing to pay $250 per month for the group coaching.

What I actually got from the coaching was awkward weekly calls in the middle of the work day that weren’t recorded and even when I caught one or two it was just the coach waxing existentially about nothing.

When I went to the live mastermind meeting, I realized that I knew what the coach was going to say before he said it and the majority of the other people in the room were sheep. With only a year of building a business online, I could have coached them.

With one more day to go in the mastermind session, I emailed the coach from the train ride home and quit. He quoted me his hourly rate ($500 per hour, of course) and asked if I would like to work together personally.

Coaching Experience #2: Okay, so you do not always get what you pay for

The long and short of this was that I should have learned my lesson. But it had been two years and I guess I had emotionally separated myself so much from my last coaching experience that my brain was open to something new.

I went to an event in San Diego and ended up hiring yet another coach at the end of the year (2014).

I should have recognized the signs.

Using words like “imagine if” and “take imperfect action” (are you seeing a trend here?), I should have known better.

God. Even typing that out makes me want to die. There were so many of us who signed up and none of the people in my group are making the promised “5 figures per month” (I know because I’ve watched them).

I got two 30-minute coaching calls with the head guy’s “team.” In the first set, one call was the “expert” spending 30 minutes telling me to start a youtube channel and the other told me to change my website headline.

In the VIP strategy session with the head guy, our conversation focused primarily on my dreams and vision for the future with no actual strategy until he offered to hire me to come aboard and join his team.

He sent me a new contract to join his team, but would never spend more than 10 minutes on the phone with me. I was constantly referred to working with his “team.” He would never settle on a final amount he would be paying me and left so many details vague and uncertain that finally (FINALLY!) enough red flags were raised that I had to call it.

As he had issued a secondary contract, it rendered the original contract in void and I left the program altogether, but not without losing almost $5,000 in the process.

Coaching Experience #3: But then again, maybe you do get what you pay for? What’s going on here?

Apparently, I’m a glutton for punishment because at the end of 2014, I hired a second coach (WHAT IS WRONG WITH ME?!) to help me with launching my podcast.

And you know what?

He did everything right. In fact, most of what I’ll outline below of what to look for in a good coach is based on the work that I did with him. You can contact him here.

I was set up for success, crushed my podcast launch and created a strong podcast brand that continues to be successful (for my goals) years later.

Wait, if two coaches could be so bad, and one of them so GOOD, how the hell do I know who to hire as a business coach?

These experiences, as well as my own experience coaching clients, have allowed me to put together a brief guide for you on how to know whether or not you should hire a business coach.

Below, I’ll share with you five characteristics of top business coaches, including the one that I think is the most important, as well as the one you absolutely must avoid.

Why Hire A Business Coach?

Before I get into the 4 examples, I’m sure there are a few of you out there who have never thought of hiring a business coach. If you already know, or have hired one, feel free to skip this section. If you don’t, keep reading.

A business coach is a person you hire to guide you through a pre-defined process and bring out the best in you as a business owner.

You’re ready to hire one if you’ve done your homework on the potential coach and:

If you’re there, here’s what to look for:

This is the easiest characteristic for a business coach to possess and display.

The ‘professional and responsive’ business coach responds to emails regularly (although not always immediately) and is always on top for scheduled calls.

They’re willing to provide contact information for past clients and encourage to to contact them prior to hiring the coach.

Provides You With Deliverables and Has a System

Accountability is one of the most important aspects of coaching. If we could do it on our own and hold ourselves accountable and do the right thing every time, then every industry from business to athletics would not require coaches.

I got this from my podcast coach, Jeff Brown, but having a list of deliverables you can show to your client prior to the first coaching call is really helpful.

“Given your goals, here’s all of the things that I think I can help you with. Is there anything missing from this list?” is a line you will see in email exchanges with the best coaches.

Works With You Personally

This is really the most important. When you hire a coach, make sure you’re working personally with them at all times during the agreement.

You’re paying for their expertise and coaching ability and if their cost reflects those skills, you want to be sure you’re working directly with them.

Also consider that the best coaches would never consider siphoning you out to a team of lower-tier coaches on their team or contractors.

Actually Owns a Business AND Studies the Practice of Coaching

I know I’m not the only one like this, but I’m not comfortable teaching online business as my only business.

You might think this is totally obvious, but the sheer number of people offering ‘coaching’ having never started an online business and have never put time into the craft of coaching is astounding.

The best business coaches have, in the recent past (or currently), run a successful online business.

Shows Initiative in Understanding Your Business (THE MVP!!!)

This is, hands down, (what does that even mean?) the most valuable characteristic that you can find in a coach.

A coach that dives deep into your business and is excited about the work you’re doing is invaluable.

Don’t feel like you need to hire an expert in the business you’re looking to pursue. When you get coaching from somebody who has deep knowledge of the industry you’re entering, there’s a tendency for them to ‘tell’ instead of ‘coach’ and the client becomes dependent on the coach over time. The client doesn’t develop the qualities in themselves that they need to succeed and are simply following instructions from the coach.

In Coaching for Performance, John Whitmore discusses how he ran out of tennis coaches and used golf coaches instead. Because the golf coaches couldn’t focus on the technical aspects of tennis, they produced better tennis players overall.

We often feel that to learn webinars, we need the ‘webinar expert’ and what we really need is a great coach.

The One to Avoid →Danger Will Robinson! Danger!!!

THEY TRY TO SELL YOU THE DREAM.

If you hear either of the following phrases, RUN:

and then obviously, if any of the opposites the positive qualities are true, you should also see some serious red flags, such as:

I sincerely hope this article serves you well.

I’ve spent a lot of time and money learning the lessons above and I’m honored to be able to share these things so that, hopefully, you don’t make the same mistakes that I have. If it’s been helpful, I’d love it if you’d join my newsletter.